Three minutes with Kane Pollard of Sol Bar and Restaurant

South Australian chef Kane Pollard nurtured his Tea Tree Gully restaurant The Topiary into such a local success that SkyCity headhunted the 34-year-old to take the helm of the sparkling new Sol Bar and Restaurant. 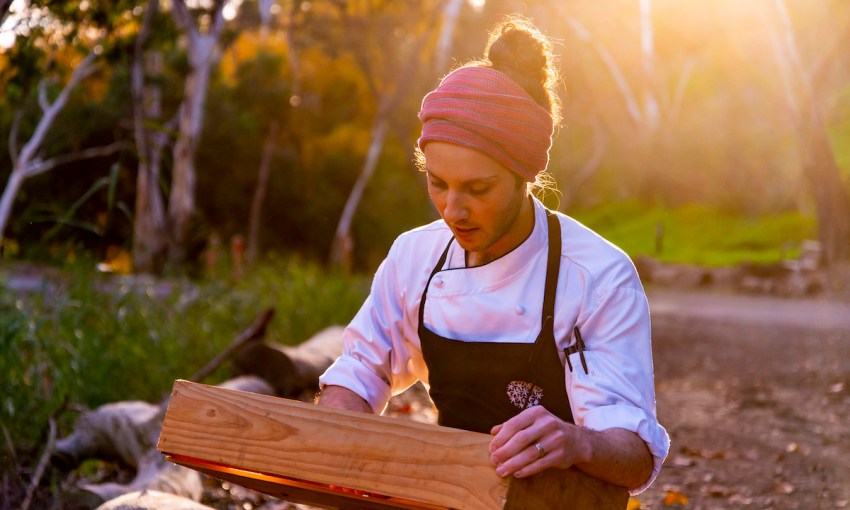 As told to Ben Kelly

BEN How did growing up in a market gardening family influence you?

KANE The majority of my time was spent in the Hills with my mum Kathy, and I also spent some time in Beachport along the coast with my dad Craig and younger brother, Cory. I worked in the market garden during school holidays for my grandpa Don, picking rhubarb, planting seeds, pulling stinging nettle. I rode my bike there each morning as the sun rose. I remember it being invigorating. There was a sense of space and freedom working out in the field. After school my brother and I would explore outside of Uraidla, following creeks and picking blackberries, exploring the pine forests, climbing quartz boulders and kicking mushrooms. We were literally surrounded by produce. I didn’t realise how lucky I was at the time, but now I understand that not only was I fortunate enough to grow up surrounded by incredible ingredients, but I was given the opportunity to breathe. Whether I was in the Hills or along the coast, I always felt alive and invigorated.

BEN In moving on from The Topiary, what are you most proud of?

KANE My father-in-law Pelly and I purchased the business nine years ago, and my wife Adele and mother-in-law Deb have been working with us ever since. We’ve been through some of the toughest times in hospitality together, and we wouldn’t have made it through if we weren’t family. On top of that, our extended family of the restaurant team has dug deep when times were at their absolute toughest. The key to The Topiary’s success has been its people. The consistency and flow that you can achieve with a passionate and long-standing team like that is a very unique and magical thing.

BEN A restaurant on top of a casino skyscraper is quite a contrast!

KANE It’s been an absolute whirlwind. Before having the opportunity to see the restaurant space I struggled to create a connection with the building and its surrounds. But after stepping onto the Sol terrace, looking over the hills and the ocean, then into the restaurant space I could start to feel something special developing. We will take a little time to find our feet, but I’m confident and excited about reaching that stage soon.

BEN Tell us about the menu …

KANE The menu has been built to showcase the unique climates and micro-climates of South Australia and to really zero in on not only nose-to-tail, but root-to-bloom. There aren’t too many places in the world that you can get mushrooms from the forest floor in Mount Crawford, incredible seafood from the cool waters of the gulf, booming crops from the warm soils of the Adelaide plains and the lush and green wild fennel of the Hills.

BEN How does sustainability play a role?

KANE SkyCity has a full waste program in place to make sure all green waste and plate waste gets composted. We are working with OzHarvest to reduce further waste, as well as supporting local suppliers throughout all venues to lower the food miles.

BEN Outside of the kitchen, what do you do to relax?

KANE Apart from spending time with family, I love to forage and look at what’s around, how the weather has changed and how the plants have reacted.

KANE I love heading to Encounter Bay and Goolwa for a day trip or a quick night away. Doing the pipi shuffle in Goolwa, walking the Bluff in Encounter Bay, stopping at the Port Elliot Bakery or Kuti Shack for lunch, and a coffee at De Groot. I fall straight into chillout mode when I’m out that way, it’s a rugged yet beautiful part of the state.

BEN Something most people don’t know about you?

KANE I was limbo king in primary school, three years in a row.

This story first appeared in the February 2021 issue of SALIFE Magazine.