In the garden: Bountiful beetroot

Whether we loved it or loathed it, for many of us our first experience of beetroot was from a can, but this entirely edible vegetable is now embraced by gardeners, home cooks and restaurant chefs alike.

Beetroot, a member of the chenopodiaceae family, is generally grown as an annual, to be harvested for its swollen tap root tuber and delicious leafy greens. Along with silverbeet, it’s a variation of the plant Beta vulgaris and the leaves have been used as an edible vegetable for centuries. It was not until the 16th century that varieties were grown as a root crop, firstly for sugar extraction and then as a versatile vegetable. The varieties are numerous and range in growth rate, flavour, colour and size. It seems that the slower-growing types tend to be sweeter and more flavoursome.

Beets are hardy, frost tolerant plants that will grow in most conditions, including partial shade. They grow best in rich, well-drained soil, with plenty of aged manure. If drainage is a problem, it can be improved by creating mounds but ensure the roots are not above the surface of the soil. A neutral, to slightly alkaline soil pH is ideal but acidic soil can be treated by adding lime or dolomite. They also do well grown in containers using a premium potting mix.

Beetroot seeds are clustered and look a little like cork. Soaking the seeds in warm water prior to planting helps speed up germination. Sow the seeds directly into the prepared site in spring, summer, or autumn to a depth of one to two centimetres, or sow into seed trays for transplanting as soon as the first real leaves appear. The latter is probably the best if weeds are a problem as small plants can easily be lost among them. The seed will germinate at low temperatures but preferably around 20 degrees and the small plants should appear about a week after planting.

Thin the seedlings out (or plant), leaving a space of five to 10 centimetres between plants and 20 to 30 centimetres between rows. It is a good idea to plant about 10 to 15 seedlings every few weeks to maintain a continuous crop. If you are in a particularly cold region, wait to plant your beetroot in spring so they can build nutrients in the roots to survive cold weather.

Beetroot does not have many problems but you may encounter the development of a non-uniform colour and a woody taste. This could be the result of an erratic watering regime. High alkaline soils can also cause poor root development, so it is essential to prepare the soil and provide trace elements of complete fertilisers as well as mulching and regular watering.

Beetroot can be harvested at any size depending on your preference and what they will be used for; about 10 centimetres in diameter is ideal as over-mature beets may be tough and woody. Don’t be in too much of a hurry to dig up the beets as it is documented that the ones harvested after the first frost are generally the sweetest. Trim the foliage from the harvested beetroot leaving a section of stem in place and be careful not to cut the root when digging them up. Wash the root carefully and remove any fine hairs. Don’t break the skin because this can cause bleeding during cooking.

Beets can be boiled, steamed or baked and eaten either as a hot vegetable or added to a salad. They can also be pickled in vinegar. The skin can be easily removed from the hot beetroot and if you plan to pickle them, dip the beet into iced water to suspend the cooking process. Beetroot can be grated and eaten raw. To prepare the foliage, trim and remove dead or damaged leaves, wash them thoroughly and cook as you would spinach or silverbeet.

Beetroot can be stored in the crisper section of the refrigerator for about a week after harvest, after which it may become tough.

Varieties of beetroot differ in appearance from round or globe-shaped to oblong or tube-shaped. They come in colours ranging from pink, red, orange, white and golden. Heirloom varieties include Golden Beetroot which has sweet roots that don’t bleed, Sugar Beet, a sweet beet used in desserts, Bull’s Blood, known for its food colouring properties, Mini Gourmet, often preferred by restaurants, Globe, a main crop heirloom, and Italian Chioggia which has pink rings and white flesh like an onion.

To save the seeds of your favourite variety, leave three or four plants in the ground until they flower and die back, then collect the mature seeds to store in a paper bag or glass jar in a dry place until you’re ready for replanting in spring. 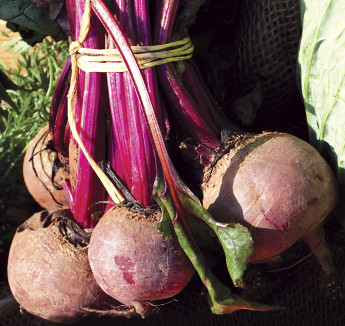