In the garden: A screen sensation

A location where hundreds of Riverland youths once spent their evenings has been transformed into a romantic and resourceful garden oasis.

On a property with nothing more than tyre tracks, remnants of demolished buildings and an old drive-in movie screen, Raelene and Chris Schutz worked hard to reinvent Riverline into the haven it is today.

Raelene and Chris purchased the former Loxton Riverline Drive-In in 2000 after a housing subdivision of the property fell through, and moved into a converted shed the following year. Initially, it was a practical purchase to give Chris somewhere to store his work truck and bobcat out of town, but is now their beloved home. “This gave us room to park, keep an icon like the drive-in maintained and still live close to town,” says Raelene.

Chris’ previous work in landscaping was instrumental in creating strong foundations for the garden from a bare gravel site. After Chris hand-built a retaining wall near the shed, a pond and water feature soon followed, and their zest for gardening had taken seed.

While working on a demolition site, Chris came across discarded irrigation pipes, which he stood upright to create an inspired wisteria arbour. From here, the couple developed a keen eye for repurposing found and unique objects, with many pieces and plants saved and transplanted along the way.

“The vision was just for a nice garden, but it’s gone way beyond our expectations,” says Raelene. The two and a half-acre garden evolved over the next 17 years into a hidden Riverland treasure. With its array of styles and areas, Riverline now bursts with colour in the scrub that also welcomes kangaroos, lizards, parrots and kookaburras every day.

A love of rustic farm implements has seen the garden decorated with tractors, wheelbarrows, carts, drums, bicycles and timber. “We like to reuse and recycle as much as we can and we love the look of corrugated iron and rust, even in our shed!” says Raelene.

Ornaments and sculpture pieces have been picked up along the couple’s travels, such as Raelene’s favourite bird of paradise water feature from Goolwa and a metal horse from a local SALA exhibition.

“We love the fact that no two things are ever the same,” she says.

The path weaves through the wisteria arbour to the centre of a Tuscan amphitheatre, home to a collection of bearded irises and a grand urn water feature. Continue to the nearby pond, which has over the years become a cornerstone of the retreat, with irises and water lilies brought to life by the soothing waterfall, and re-claimed palm trees providing shade for the resident fish, frogs and yabbies.

Hundreds of tonnes of sandstone and local rock border paths that meander through a veggie patch, fruit trees, native section and sunken iris garden. The vibrant annual beds are full of more than 400 pansies and a mass of ranunculi that are lifted and re-planted every year before Mother’s Day.

A plot of 110 dwarf and tall standard roses are coordinated into coloured beds and along the back fence are Pierre de Ronsard and Banksia climbing roses. The jewel in the Riverline rose collection is Chris’ grandmother’s 45-year-old rose bushes salvaged from her garden in town, now thriving in their new home.

The assortment of trees includes pines, oaks, a plot of the sumptuous “Diamonds in the Dark” crepe myrtle and a salvaged weeping mulberry tree originally dated to 1923. “It provides the most magnificent-tasting fruit I’ve ever had,” says Raelene.

Among the endless maintenance jobs in the garden, the busiest time is mid-July to mid-August with hours spent pruning roses and fruit trees. Ahead of the garden’s peak season in spring, winter weeds are dutifully removed to make the most of winter rains, irrigation is checked and the whole garden is mulched heavily to guard against weather that can reach 48C.

In a Riverland garden, unforgiving summer heat is a significant challenge and two years of drought early on was a hurdle for young trees, which barely survived. Hot summers are followed by frosty winters with low rainfall of an average 250 millimetres, which means a lack of water has had to be counteracted through various methods over the years. In addition, with the drive-in being utilised by Loxton cars until 1985, the ground was left compacted with poor quality soil and little organic matter.

“We have brought in all the soil, put in truckloads of local pig manure we replace each year, and mulch heavily with pea straw to retain moisture,” says Raelene. The ground was levelled to slope towards a small dam that was built for stormwater run-off, which is stored in a 160,000-litre tank. Greywater is also recycled and hardy, water-wise plants such as salvias and grasses are prioritised, though thankfully large trees are steadily providing more shade. 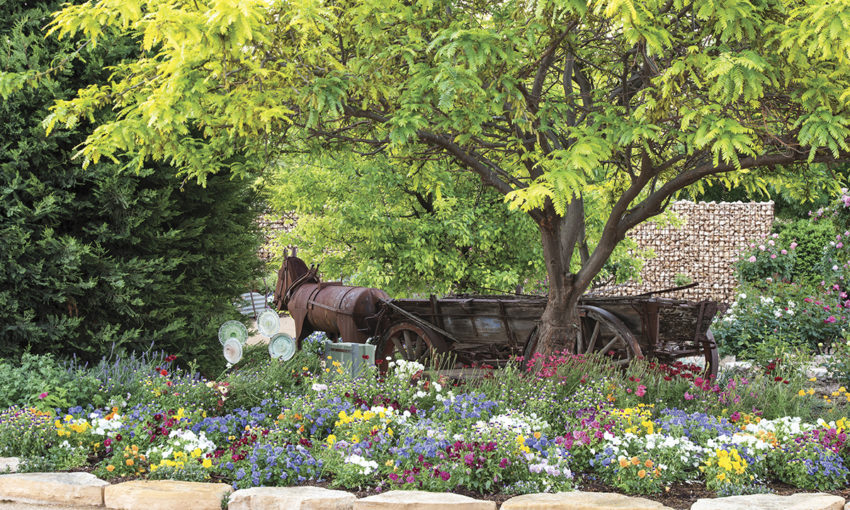 A passion for self-sufficiency has filled the patch with vegetables, herbs, nuts and fruits to produce fresh, dried and preserved apricots, peaches, nectarines, sultanas, lemons, olives and plums available year-round. A helpful coop of hens take care of any scraps and produce free-range eggs for use in Raelene’s baking.

“Our garden is such a relaxing place to sit back and unwind, entertain, exercise and enjoy with family and friends,” she says.

A colonial cottage was added to the property in 2015 and made of materials reclaimed from Yongala Station dating back to the 1850s, including original doors, windows and pressed tin. The couple make use of the cottage and gardens for accommodation, weddings and intimate functions.

The fragrant blossoms of the apricot tree in July are the first to flower among the bare deciduous trees and foreshadow the rainbow hues ahead.

“The garden comes to life in spring as absolutely everything bursts into colour,” says Raelene. “Trees have lush new growth after the dull of winter, roses accompany the blossoms of ornamental fruit trees, prunuses and of course wisteria; it looks amazing here.”

The couple’s favourite spot is relaxing on the rock seat surrounded by natives. “From up here you can see our amazing sunsets, sip on a glass of local wine and oversee the rest of the garden to admire our work and make further plans,” says Raelene.

Despite both Chris and Raelene working full time, new projects are constantly on the horizon. “The garden is always evolving with the seasons,” she says. “I’m not sure we’ll ever be finished!”

The garden is unlikely to expand in perimeter, but it will be filled with more flora as tree canopies grow and plants become more established. Next on the list is finding time to finish the outdoor pizza oven and fern house.

While the last showing was more than 30 years ago, the drive-in screen is still standing and according to Raelene, is in great condition. “Chris still has dreams of using it again – we’ll have to wait and see!” she says.

“I’ll work until I can’t remember who ordered what”

Meet Malcolm Hawkins, who has been a waiter at Adelaide's top restaurants for almost 30 years.

Sunday lunch is a weekly excuse to gather friends and family to the table for a shared meal - but what to cook? These hearty dishes will have them all asking for more.

Love is a universal language, and these couples embody the rich cultural diversity and heritage that make up modern South Australia.