In the garden: The gardener’s garden

Even in the most challenging of coastal locations, this true gardener has created something that expresses her lifelong love of horticulture.

My mate’s garden this week is a genuine “gardener’s garden”. The person and the product (the garden) are almost one; it’s a true representation of each helping the other to achieve the end result, a magnificent garden.

I first met Liz Trabilsie many years ago, when she came to our warehouse to purchase some organic fertiliser. I recall offering to place the heavy bags in her car, but she insisted that as she would have to get them out, she may as well put them in. Liz, a petite young lady, proceeded to pick up the bags and throw them in the car. I was impressed; this gardening gig obviously keeps one fit and strong.

It wasn’t until many years later that our paths crossed again when she worked at Fred’s Nursery and then at Norwood Garden Centre. Liz was later appointed head gardener at Carrick Hill in 2001. This was a position that not only involved the management of staff and gardens, but it was also a very hands-on job, one she excelled in for many years. The heritage gardens and grounds, some 40 hectares in total at Carrick Hill, really blossomed and developed during those years, mainly due to Liz’s love and understanding of gardens and plants, but also her speed and work ethic were nothing short of breathtaking. It was a sad day when Liz left in 2008. 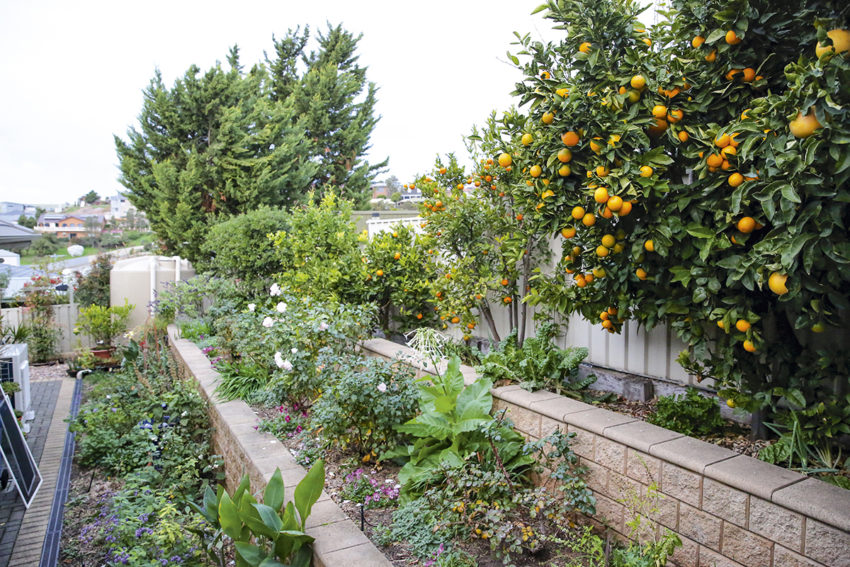 Since then Liz has been working as a part-time garden specialist at a local school, and more recently, as a private gardener to one or two large Adelaide gardens — again, all hands-on.

Liz and her two siblings were born and raised on the sheep station Cuthero homestead on the Great Darling Anabranch in west New South Wales. This was the start of young Elizabeth’s love of gardening, helping her parents in the veggie garden and also looking after the orchard and other general garden areas — in-between mustering and managing sheep on horseback, of course!

Liz married and had children while still living on the property. When her kids became involved with correspondence classes, Liz had time to spare and completed the Ernst Lord Certificate in Landscape Gardening correspondence course. After relocating to Adelaide in 1992, Liz was well on her way to fulfilling her lifelong dream of becoming a professional horticulturist. 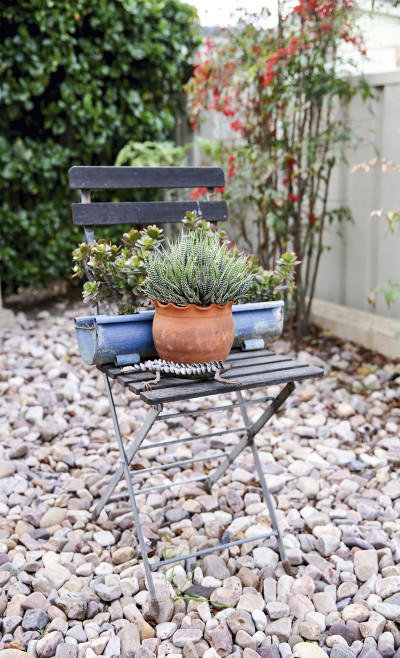 So, what is this gardener’s garden really like? Situated in the southern seaside suburb of Hallett Cove, I must admit I did have some apprehension of finding an exposed coastal property, with the odd tortured tree here and there, with frontline shrubs doing their best to offer protection to less hardy specimens. How wrong I was! Liz’s garden was a stunningly pleasant surprise.

Turning into Liz’s street, which was well-manicured and cared for, I could identify her house immediately. There, with a view of Gulf St Vincent, was the gardener’s garden. At this stage, I really didn’t quite know what trees, shrubs and other plants would be growing in this coastal area, but surprisingly there were many of the old favourites doing very well. Growing at the front of Liz’s property was a row of pyrus in all their autumnal glory. I could imagine the shade they would offer the front of the house and garden on a hot summer’s afternoon.

These, along with the topiary Viburnum tinus that were flanking the pathway to the front door, created a delightful entrance. The garden beds are mulched with pebbles — a sensible solution as normal organic mulches would probably finish up at Largs Bay on a windy day. Liz has also made use of a borrowed landscape of trees and some very strategic verge plantings of topiaried Teucrium fruticans.

The rear garden is just as impressive. These sloping areas are retained by carefully placed boulders to create a large, informal garden. The beds contain plants from friends, odd purchases, and bits and pieces collected over the past 20 years. It was a showpiece even when I visited in the dying days of autumn, one can only imagine the spectacular showing that spring and summer would offer. 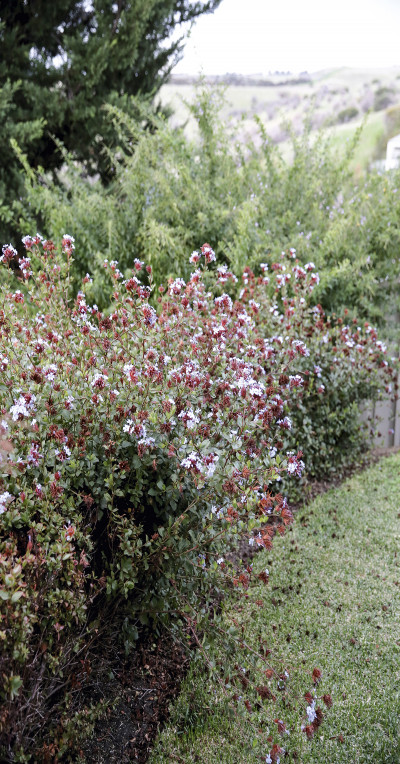 The side garden, facing north, is nothing short of spectacular. The view from the house takes in the garden area, then the streetscape, then finally through to the sea. Does it get any better than that?

If one was looking for the “glue” that holds the garden together, I would say it is the vast and sensible selection of trees, shrubs, bulbs and succulents that have been chosen and planted to create the structure, formality and casualness of this garden. This entire garden was created with love, passion, thoughtfulness and bloody hard work.

The whole property has been planted out, as far as possible, including a mini orchard, a smattering of roses, herbs and vegetables, shade, and ground covers galore.

This garden is an amazing example of what can be achieved in the stark, windswept area of Hallett Cove, with average soil and a sloping block. It’s a credit to Liz and her partner Feres and family, who have spent time, effort and money to develop this special garden.

I asked Liz to look back over the many years of developing her garden for any plants that stood out and underwrote her achievements. Liz mentioned salvias, teucrium, Viburnum tinis, Plumbago ceratostigma, Duranta “Geisha girl”, roses, roses and more roses, quince trees, cosmos, statice, miniature pomegranate, Grevillea olivacea and nandina … plus succulents of all shapes and sizes, and the interesting Senicio mandralisce, the blue chalk stick, and far too many more to list.

I was impressed by all aspects of this garden; it does deserve the title the gardener’s garden, and is one that any gardener would cherish.

If you think you may recognise the name Trabilsie, well yes Liz is married to Feres Trabilsie Jnr, son of the famous Adelaidean hairdresser of a few years ago. Feres Trabilsie Snr is still going strong and is a regular visitor this beautiful, relaxing garden.

This story first appeared in the July 2019 issue of SALIFE Magazine.