The art of food

Food culture has been a constant theme in the life and work of artist Billie Justice Thomson, who also happens to be close friends with a bunch of Adelaide foodies.

A relaxed Billie says she has fond memories of cooking with her parents as a child and was making dinner parties for her friends from age 12.

From giant spears of asparagus, to a bottle of Kikkoman sauce and her iconic jug of beer, it’s clear that food and fun are themes that run through the paintings of Adelaide artist Billie Justice Thomson.

Billie’s bold artworks are painted directly onto glass and perspex, recreating an old-fashioned shop window feel. She describes them as paying homage to the “kitschy delights” of eating and drinking.

The 36-year-old’s love of food culture began as a little girl, when she would stand on tiptoe at the kitchen sink and help her mum create the family meal. Billie is the daughter of well-known Adelaide singer Tubby Justice, who was a regular on the music circuit in the 1980s. What is perhaps lesser known is that Tubby was also a chef around town during that time, cooking at a variety of clubs and restaurants including the legendary Lark and Tina’s in Hindley Street.

“I was always hovering around the stove with Mum at home, absorbing all of it without realising it. That was where my love of food all started,” Billie says.

“I just assumed that everyone had a mum who liked to cook extravagant meals regularly. Mum would have a lot of dinner parties and take a lot of time to get everything ready. I was given the little manual labour tasks and I remember spending a lot of time getting the meat out of crabs and making crab ravioli, and shelling the broad beans that we’d grown and making beautiful broad bean puree. 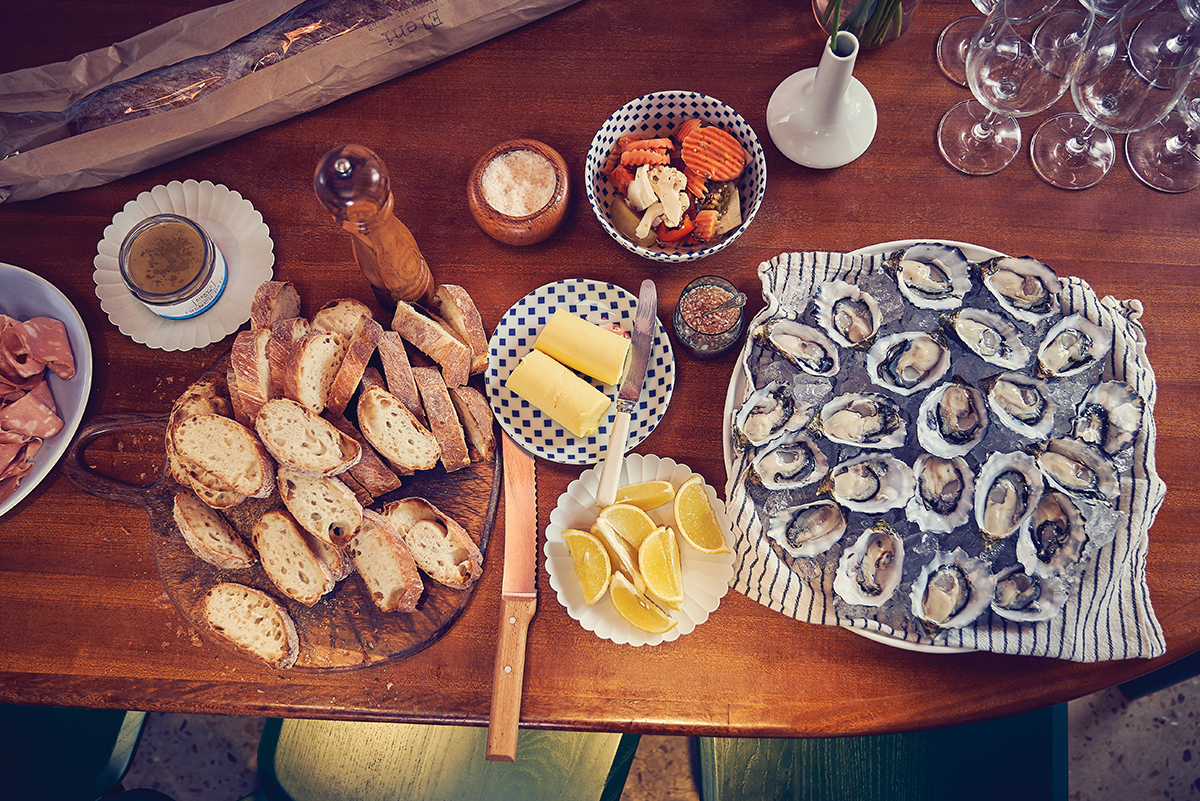 “I also remember rolling out the pasta; I loved doing that. I was about eight years old then. I loved doing all those nice little jobs you do over the sink and chat while you were doing it.”

Billie’s father Mark Thomson also had an influence on his young daughter’s food journey. Mark is the author of a series of books, Blokes & Sheds, and he also wrote a book about barbecues called Meat, Metal & Fire.

“Dad cooked a lot of barbecues when he was writing that book,” Billie says.

“He was on barbecue duty and I was on potato salad duty a lot. I made so many potato salads – Asian, German, depending on the flavour of the meat.”

As she grew more confident in the kitchen, Billie began cooking on her own, making the family meal and creating dinner parties for her friends when she was just 12 years old.

“Mum gave me a lot of freedom in the kitchen, she was never hovering over my shoulder to see if I was doing things wrong, which I think is really nice,” Billie says.

“Towards the end of primary school, I was making experimental dinners like salami and pea pasta and cooking it for my friends. I’d have them for a sleepover and cook dinner for everyone. I think cooking for friends was just a learnt thing; that’s just what you did.”

Today, Billie is again cooking for friends, many of whom she has met while working in Adelaide’s hospitality industry. Guests today include Olivia Moore, owner of LOC Bar, who has curated the wine list, while Elise Pisanello, a friend who works at Lucia’s in the Adelaide Central Market, has made dessert, a delicious black forest cake. 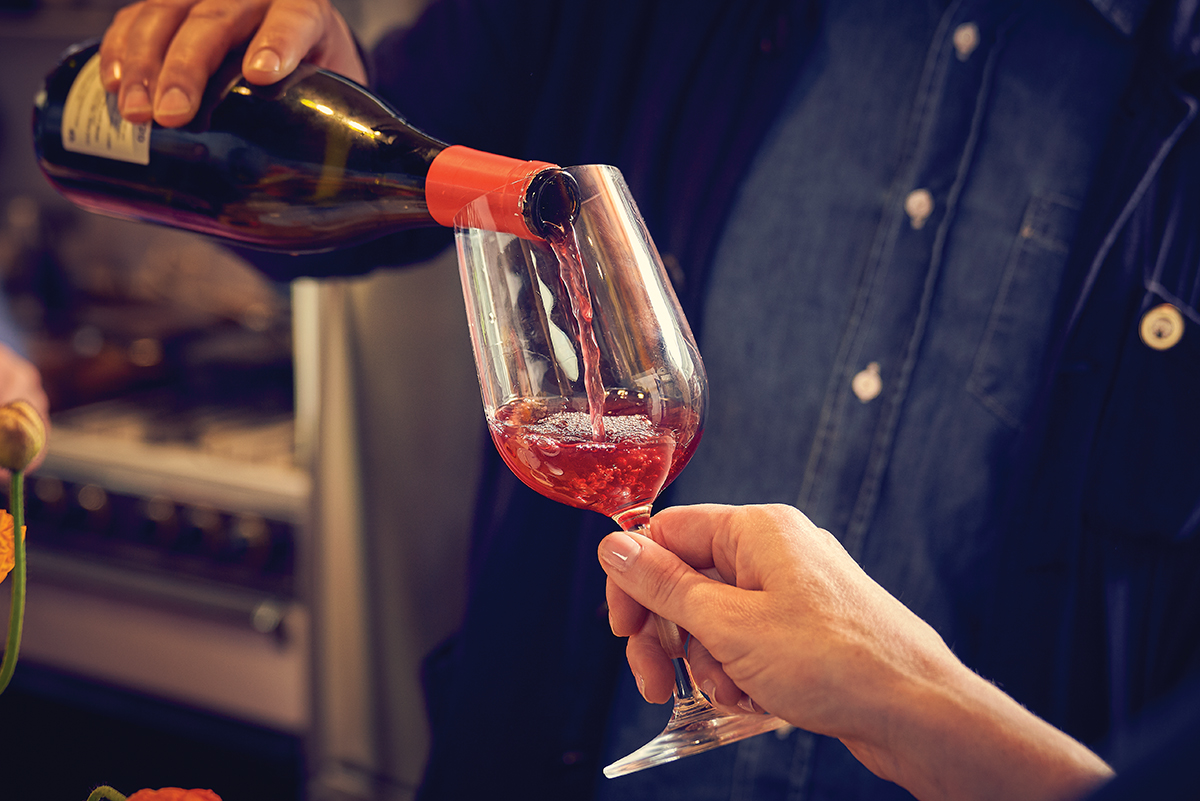 “Elise is an incredible baker,” Billie says. “I don’t bake so I was happy to delegate that job. I’m very good at delegating!”

Other guests include Sondra Deering, owner of Golden Boy in the city, Alix Gannon, who is head chef at city bar Udaberri, Tom Parbs who also works at Lucia’s as well as JamFactory, and food and wine guy about town Mark Kamleh.

It’s a creative bunch and the vibe is very retro and relaxed, as guests mingle around the island bench for oysters and wine.

Billie has incorporated food and cooking into almost everything she has done since those formative cooking experiences in her younger days.

Her first casual job was at a fruit and vegetable stall in Adelaide Central Market, and then she worked part-time waitressing at the Adelaide Convention Centre.

“Just being in the Central Market was a big influence on my cooking, even talking with customers about what they were cooking and what other staff were doing and the other market stall holders; that was a big shift for me. I was about 17 then,” Billie says.

“Then, at the Convention Centre, I was working on the big functions, that was a really high-end, very organised scale of catering and events, which was definitely a good experience but it felt like it was a bit soulless. When it goes to those really big numbers it loses something.”

Even her year 12 final art piece involved food – it was a giant 3D sculpture of a sandwich made from cushions.

“A pillow sandwich,” Billie laughs. “The bread was a metre by a metre and I sewed tomatoes and cheese, it was really fun.

“I think food is just something that I can relate to and it also has a kind of funniness; a really light-hearted silliness is what I like about it. It immediately takes away the seriousness of art that I’m not really interested in.”

Billie says throughout her years studying and creating at the SA School of Art, food continued to be a dominant theme. When she moved to Melbourne in 2010, she again got part-time work in a fruit and vegetable store, where she also used her artistic flair.

“It was on Brunswick Street in Fitzroy and it got a lot of attention because there is so much foot traffic and people starting taking photos and coming in and asking about the paintings.

“So, I would take them down and do new ones to keep it fresh and interesting. Then other shops asked me to do it too, so there was a nice commercial aspect to it and then Frankie magazine did a story on it all.”

To achieve her look, Billie has to paint on the back of her glass “canvas”, essentially painting in reverse. She begins with her bold outlines and then colours the space.

“It’s an old sign-writing technique,” she says. “So, you are painting a display on the window from the inside out.”

Fittingly, Billie’s first solo art exhibition was in a dining room, held at the Exeter Hotel. Since then, she has established herself back in Adelaide, working out of her studio at the back of cafe Sibling in the city. Billie moved back to Adelaide five years ago and lives in the eastern suburbs with husband Ryan Beer, a youth worker, and their four-year-old son Marvin, who loves to cook with his mum.

Billie says she looks forward to cooking the family meal each night, and sees it as a kind of catharsis after her busy days on the brushes.

“I’ll often think about what I want to have for dinner for the whole day,” she says.

“It’s a nice focus for me when I get home and a nice way for me to transfer my way out of art or whatever project I’m working on, to shift the direction of my brain.”

Billie says she keeps things simple and aims to cook one meal a night – not separate adult and kid’s menus. The way she achieves this is through what the family calls “choose your own adventure”.

“I really don’t want to cook more than one dinner and I want to expose Marvin to as much food as I can,” Billie says.

“Like last night, I made a basic polenta and then you can pick and choose what you want on the side – so, we had meatballs and a sauce and green beans. I always put everything in the middle and people can choose what they want.

“I apply that same principle when I’m cooking for others, I like people to have that autonomy and make their own decisions, so we’ll have chilli on the side and condiments on the table and lots of free choice. That’s our format here – that’s how I think of food.”

Billie’s ethos of communal meals and sharing plates is at the heart of her love of entertaining. She and Ryan love to host dinner parties and her mantra is to keep things simple.

“I think it comes down to the love of sharing really, bringing people together,” she says.

“I never aspire to recreate a restaurant meal or anything. I’ve never had any ambitions to open my own restaurant or move into full-time hospitality because I like the small scale and simplicity and humble aspect of cooking.”

Cooking with Marvin has added another layer to Billie’s food adventure and he likes to prop himself up on the bench and watch all the action.

“He’s paying attention, just like I used to,” she says. “I didn’t even force that, he naturally wants to sit up and see what’s going on. He is a good eater, too, and I’m very grateful he is up for trying things. He loves all kinds of pasta and he loves green beans at the moment, we called them ‘dippy beans’ because he loves to dip them into hommus. He loves his condiments; they make everything so much easier.”

“I made all this Neapolitan-style dough and I got everyone to bring an ingredient of their choice and we all made pizzas all afternoon,” she says.

“Children like simple pizza but I was getting them to help put on the cheese and pineapple, so everyone could be a part of it. It was so much fun and it was stress free.”

Billie likes to do a shop at the Central Market once a week and does her “top-up” shops at her local supermarket. She says doing smaller, more regular shops helps reduce waste and she also likes to source sustainable seafood through an app called GoodFish.

“It’s just about making informed decisions and trying not to over-buy,” she says. “I think making my own life easier is also a part of the story. So that’s how I try to cook.”

As guests tuck into their dessert, Billie looks relaxed and happy with her efforts.

“It’s not about making things fancy, it’s just about sharing and people are so grateful to be fed,” Billie says.

“It’s not really about what you are cooking; it’s being together. It’s great fun.”